It comes in bursts,
like the rising and falling
of a fickle storm
with no end or
destination,
and like a storm
It is wet and violent,
treacherous to
those nearby
and beautiful to those
who watch from
their windows,
blissful and far removed.
Sometimes I seek comfort
in the storm;
in the rage, the tears,
the spiraling thoughts
and emptiness I do not
wish to feel, yet
it is all I have ever
felt. And we all
cling to the familiar.

And sometimes it still hurts.
Sometimes I still feel the lingering sting of it all,
a memory long gone, slowly fading, but still within sight.
And sometimes I have nightmares about you
that give me shivers and cold sweats,
the image of your screaming face still imprinted in my mind.
But you were poison oak and my skin was much too fragile
to make it out unscathed.
And sometimes I can still feel the bruises you left behind,
jamming my fingers into them,
as they weep like tiny stab wounds.
And I am left here,
still trying to wipe your name from my tongue,
and oh how bitter it tastes.

This is not about you.
This is about me.
This is about all the hurt and torment I have endured as I passively watched you set me on fire. This is about my struggle to love myself to fill the hole that you made, as you left me to fend for myself like a lonely and wounded animal.
This about how I will rise high above the flames and spread my hatred like wildfire, so that maybe one day, it might reach you.
This is about how I hope neither heaven nor hell will take you, for you would surely be a disappointment to both.

So, no. This is not about you.
This is about me,
like it always has been.

Sometimes caring can be dangerous

That never seems to have an escape route

A gut-wrenching calamity of an inner struggle

That consumes your entire being

Until you are engulfed in agony

In order to find the one thing that everyone spends their whole lives searching for:

When I was a little kid, I was a pathological liar. It was almost like I had a disease. For some reason, I could not stop lying. Every afternoon, when school let out, I would climb into my mother’s car and begin to tell her more of my creative fibs. As of recently, however, it is seldom that I lie. Apparently, I have become much too blunt of a person to hide my true sentiments. Go figure. Regardless of this, I still do lie. I am only human after all, as far I as I know.

The last lie that I have told, that I can actually remember, was when my friend asked me if I was mad at her, and I said no. What she had done to cause me to be mad at her was an act that was certainly forgivable, but only forgivable in time. I had still been in shock over what had happened and was still surprised that it had even occurred at all. I was hurt and angry and I wasn’t quite sure how to move on in our friendship. I wasn’t quite sure I wanted us to have a friendship anymore. So when she asked if I was mad at her, I lied. I told her that everything was fine and not to worry.

Part of me suspected that she just didn’t want to deal with the fact that someone on the planet Earth had a reason to dislike her, while another part of me suggested that she did not and could not understand why I would be mad in the first place. If I had, in fact, confessed that I was still mad at her, that might have just lead to even more conflict, which is what I was trying to avoid. I did not want to have to remember what had happened between us by having a heated argument about why I could not forgive her at the present time. It seemed hideously pointless to tell her the truth when she most certainly did not want the truth, but the answer that would reassure her that everything was alright. So, in effect, I gave her what she wanted. I gave her a lie. 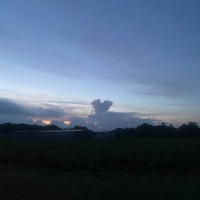